Albums by Starfield in our playlist:

I Will Go
Starfield
Songs: 10 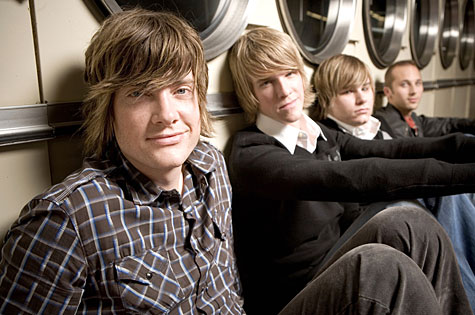 Starfield is a Canadian Christian music group from Winnipeg, Manitoba. The group has songs and albums that have charted in Canada, the United Kingdom, and the United States. They have won multiple GMA Canada Covenant Awards (Canada's Dove Awards), received four Juno nominations, five Vibes, and the Prairie Music Award for best Christian album.

The band started out making demos in a friend's basement, resulting into their first two independent albums Starfield and Tumbling After, which sold more than 20,000 units in Canada alone. "The fact that we sold any CD's to more people than just friends and family, or that we won any awards, still blows my mind," Tim said "we really just thought it would be fun to record some stuff for memory's sake. What has happened is just an amazing testimony to God's faithfulness!" The band's vision in music is: "To lift up Jesus so he is impossible to ignore."

The release of their self-titled debut album (2004) introduced the band to a whole new audience in the United States. When it came time for recording the follow-up to the critically acclaimed record, Starfield teamed up with Matt Bronleewe (Michael W. Smith, dc Talk, Plumb) for a second time while also enlisting the talents of GMA Award-winning producer Ed Cash (Chris Tomlin, David Crowder Band, Steven Curtis Chapman). The end result was, Beauty in the Broken (2006).

"When we began writing songs for Beauty in the Broken, our goal was to make a corporate worship record an album for the church," explains Tim Neufeld, the groups primary lyricist. "However, as we got deeper into the process of music and lyric, we couldn't get away from our need to first address the often nagging disconnect between us and God its tough to march right into a song like "Great is the Lord" without first acknowledging the distance that exists between us and God. At the end of the day we felt like Beauty in the Broken was an incomplete worship record without songs like "My Generation," "Captivate," and "Shipwreck" that fess up to the pain, condemnation, and doubt that often get in the way of true intimacy with Jesus."

The band concluded their record deal with EMI/Sparrow in early 2011. Rather than enter into a new record deal, the band went into the studio and recorded an independent record, covering all their own recording costs and negotiating distribution agreements. The result of those sessions, The Kingdom, is slated to release on January 31, 2012.