Albums by Vern Jackson in our playlist: 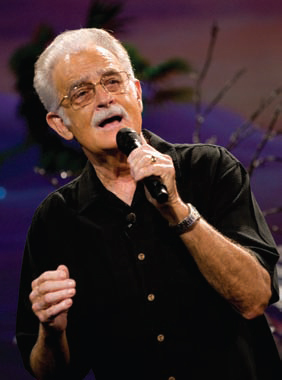 Vern Jackson was born in Afton, Iowa and began singing at the age of six.

In 1957 when Vern was 17, he traveled with his family to Knott's Berry Farm in Anaheim, California. His former pastor's wife had arranged an audition for Vern. He performed "Old Man River" to a standing ovation, and was promised a job at the park after his high school graduation. He began his career as a professional singer at Knott's Berry Farm in 1958 after graduating in May.

In 1981 after hearing a message by a preacher named Dwight Thompson, Vern began to take his faith more seriously. He was not singing professionally at the time, but continued to sing for his church and special events. Ten years later, his pastor gave a cassette of Vern singing to Jan Crouch at the Trinity Broadcasting Network. In 1991, he began appearing regularly on the network and released his first Christian recording in 1992.