Albums by Israel & New Breed in our playlist: 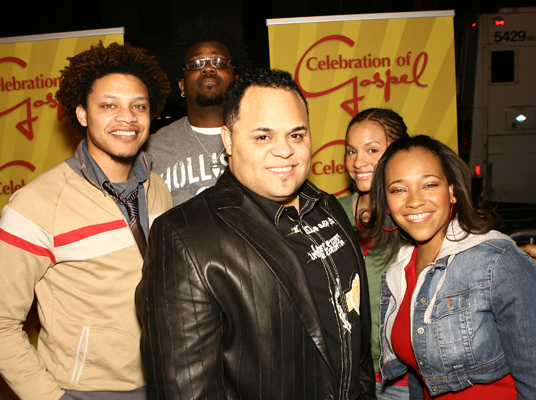 ISRAEL HOUGHTON & NEW BREED is a movement created for those who believe that worship and justice go hand in hand. We exist t...o reflect the heart of God and His love for the nations, the poor, the lost, and the forgotten. "We are not defined by the petty price tag mentalities of society. Our inheritance lies far beyond eternity. There are no limits when it comes to our destiny. As the deep goes deeper we find our name. We are New Breed".... Are you?

ISRAEL HOUGHTON & NEW BREED have achieved a synthesis of music and message that is electrifying and activating audiences inside and outside of traditional church walls. Most of their albums have been recorded before live audiences to capture their infectious energy. Leader, singer, songwriter and multi-instrumentalist Israel Houghton has seen his compositions become integral components for progressive now-generation churches. Flanked by voices filled with joy, purpose and conviction singing over galvanizing arrangements of music with African, Middle Eastern and South American slants, Israel and New Breed have swiftly amassed a legion of followers that crosses generational and cultural lines. And as barriers are blasted away, the sprawling cutting-edge unit has been fittingly graced with two Gold-selling albums, seven Dove Awards, two Stellar Awards, a Soul Train Award, seven Grammy® Award nominations, and four Grammy® Awards. The most recent being a 2011 Grammy® for Best Pop/Contemporary Gospel Album (Love God.Love People.)

Building on the theme of his Grammy-winning 2009 offering The Power of One, Houghton returned to the studio, this time London's famed Abbey Road Studios, to record his new masterwork and another Grammy winner, Love God. Love People., with a little help from his friends. There, holed up in a hallowed space of classic recordings by Rock royalty The Beatles, Houghton and his crack team of co-producers Aaron Lindsey and Tommy Sims, along with guests Fred Hammond, Kirk Franklin, and Take 6's Claude V. McKnight, Mark Kibble and Joey Kibble, created a new ode to love in this epic, 12-song cycle. The result, Love God. Love People. (Integrity Music/Columbia), delivers the musical versatility, profound lyrics and galvanizing displays of vocal and instrumental virtuosity fans have come to expect from Israel Houghton.

Summing up Love God. Love People., and the culmination of his first 20 years in music ministry, Houghton states, "For this season of my life, this is what I'm still passionate about. If I wasn't an artist, I would still be an activist - out trying to make a difference and giving a voice to those who don't have one. New Breed could have easily found its end at any time overnight. Not because the music wasn't good, but because we had failed up to that point to discover our real purpose. It was not to build a platform under myself but to build a platform under others. Once we as a team grasped the understanding that 'Strength is for service not status' (Romans: 15), we knew our success was not about winning awards, selling platinum CDs or selling out concert halls. It was about taking whatever momentum we could gather and giving it back in service. That's what has kept me and New Breed relevant, focused and effective. And I am grateful that God has surrounded me with people who have that same heart.”