Albums by Newsboys in our playlist:

Step Up to the Microphone
Newsboys
Songs: 10 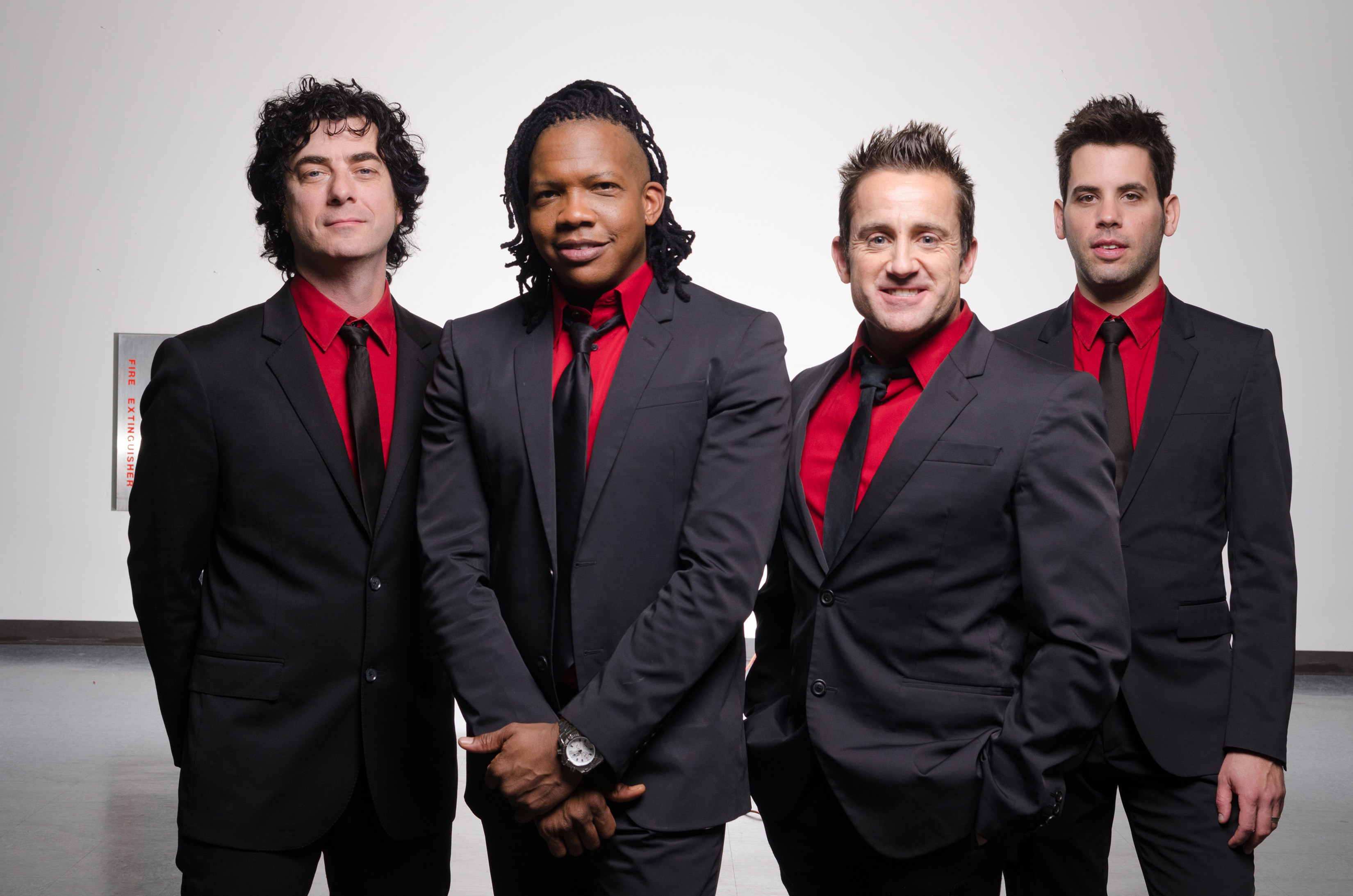 Newsboys are a Grammy Award-nominated Christian pop rock band. Since the band's founding in Australia in 1985, Newsboys have released fourteen studio albums and have been one of the most popular Christian music artists of the past two decades.

1980s The band was formed in Mooloolaba, Queensland in 1985 by two young men: Peter Furler and his school mate George Perdikis. Two other teens were added soon after: Furler's best friend, John James, and guitarist Sean Taylor. The band's original name was The News, but once in the U.S. they changed it to The Newsboys to avoid conflict with the U.S.-based band Huey Lewis and the News. The band came to the United States in late 1987 after getting signed with Refuge Communications and released the album Read All About It in 1988 in the United States.

1990s After signing with Star Song Communications, they released two more albums in 1990 and 1991: Hell Is for Wimps and Boys Will Be Boyz. None of the three albums garnered much attention, and the band's lineup changed with every release.

It wasn't until their 1992 album, Not Ashamed (containing a cover of the DeGarmo & Key song "Boycott Hell"), that the band gained notice in the Christian music scene. Steve Taylor, a singer-songwriter and producer, began a partnership with the band, producing the band's record and writing most of the lyrics for their songs. Furler remained the band's primary songwriter and beginning with this album began sharing lead vocal duties with James and continued to do so until James' departure.

In 1994, amidst continued lineup changes (which included the addition of mainstays Jody Davis and Duncan Phillips), the band released Going Public, their fifth album and first real success. The record proved to be a watershed for the group, winning a 1995 Dove Award for "Rock Album of the Year". It also produced three #1 hits: "Spirit Thing", "Let It Rain", and, most notably, "Shine". "Shine" won the 1995 Dove for "Rock Recorded Song of the Year". In 2006, CCM Magazine listed "Shine" in the top ten in its ranking of the 100 Greatest Songs in Christian music.

The 1996 follow-up album Take Me to Your Leader was recorded with an expanded line up with new additions Phil Joel and Jeff Frankenstein. The album produced more #1 hits: "God Is Not a Secret", "Reality", "Breakfast", and the title track. This album also won the group's third Dove, this time for "Recorded Music Packaging of the Year". This album spawned the Newsboys only movie Down Under the Big Top (1996), which was based on the song "Reality".

In late 1997, James announced he would be leaving the band. With his departure, Furler moved from drums to vocals and auditions were held for the now-vacant drum position. Eventually, Duncan Phillips, who had previously played keyboards and percussion for the band moved over to the drum kit. From 1998 to 2003, the band's lineup of Furler, bassist Phil Joel, guitarist Jody Davis, keyboardist Jeff Frankenstein, and Phillips stayed constant.

The first post-James record, Step Up to the Microphone, sold well with the song "Entertaining Angels" winning the 1999 Dove for "Short Form Music Video of the Year".

The band returned in 1999 with Love Liberty Disco, the band's only album to significantly deviate from their pop rock sound. Instead, this particular album featured more of a disco sound. Still, it produced several hits, including "Beautiful Sound" and the title track. The LLD tour was significantly more popular than the album. This tour featured an inflatable arena, called the Air Dome.

2000s In 2000, Newsboys headlined the annual, traveling CCM concert, Festival Con Dios, with Audio Adrenaline and The O.C. Supertones. That same year, Newsboys released a greatest hits compilation, Shine: The Hits, which did not include any songs from the Love Liberty Disco album but included four new songs, two of which ("Joy" and "Who") went to #1. After this album, the band did not release any all new material until the spring of 2002 release of Thrive. Also in 2002, The Newsboys recorded the track "In the Belly of a Whale" for the end credits of the 2003 Veggie Tales movie Jonah: A VeggieTales Movie.

The Newsboys then followed with two praise and worship albums: Adoration: The Worship Album in 2003 and Devotion in 2004. Late in 2003, Davis departed and was replaced by Bryan Oleson on guitar. In 2005, The Newsboys co-authored a book of devotions with Jim Laffoon entitled Our Daily Blog which was published by Inspiro and released on 1 November. In 2006, Oleson left the band in order to focus on his own band Casting Pearls and was replaced by Paul Colman, formerly of Paul Colman Trio.

More radio hits came in 2006 with a live version of "I Am Free" (originally written by Jon Egan of the Desperation Band), and "Wherever We Go". On 31 October, 2006, The Newsboys released a pop/rock record entitled GO. GO featured David Eri as a co-writer and the songs "Something Beautiful" and "In Wonder" were big hits on Christian Radio. That December, Joel announced that he would leave the band to pursue his own projects and albums. On 8 May, 2007 the band released GO Remixed which was made up of new versions of the songs from GO and featured remixes by Tedd T., Jeff Frankenstein, Max Hsu of Superchick and Lee Bridges.

On 20 November, 2007 the Newsboys released their second greatest hits compilation, The Greatest Hits. The eighteen-song CD also features two new songs "I Fought the La..." and "Stay Strong." This album was followed by Newsboys Live: Houston We Are GO, a CD/DVD combo recording package of a show from the GO Tour, which was released on 30 September, 2008. Also in 2008, the band, with Steve Taylor providing vocals, recorded the song "Yo Ho Hero" for The Pirates Who Don't Do Anything: A VeggieTales Movie.

Present Newsboys in concert, 13 March, 2009, with Jody Davis and Peter Furler On 5 January, 2009, Colman announced he would be leaving The Newsboys to return to his solo projects. At the same time it was announced that Davis would return to the band, after a 5 year hiatus. “I am thrilled to be returning to the band and back with my bandmates, who are some of my best friends,” says Davis, “this is a big change in my life, and I’m looking forward to the tour and new record with excitement.”

In 2009, it was announced that Furler, having toured with The Newsboys since the band's inception, had decided to step back into a support role and would continue as the band's primary songwriter and producer. Because of this, a replacement lead vocalist was required so the band could continue touring. On 9 March, 2009, it was announced that Michael Tait, formerly of dc Talk, would be the new lead singer. "Michael Tait will be touring with the band as lead singer with Peter making special appearances throughout the year. Peter will continue with the band and his trademark songwriting and production will remain as he focuses his professional career toward future Newsboys recordings." On 17 March, Tait performed his first full concert as lead singer in Highlands Ranch, Colorado.

The Newsboys released the studio album In the Hands of God on 5 May (on Inpop Records) with Max Hsu (Superchick and tobyMac) producing the album. Long-time collaborator Steve Taylor co-wrote all the songs and sang on one song. During their 11 September concert in Orlando, Furler announced that this would be his final guest appearance with the band.

The Newsboys' latest studio album, Born Again, was released on 13 July, 2010 and debuted at #4 on the Billboard 200, their highest debut position, and sold over 45,000 copies in its first week. On 12 October, 2010 they released the Christmas album, Christmas! A Newsboys Holiday. In 2011, the song "City to City" from GO Remixed was featured in the trailer for the Disney Pixar movie, Cars 2.