Albums by Pocket Full of Rocks in our playlist:

Song to the King
Pocket Full of Rocks
Songs: 12 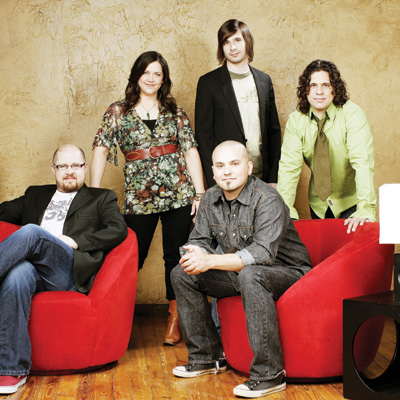 Long before landing a record deal and producing radio hits "Alive" and "Come As You Are," Pocket Full of Rocks was the “little independent band that could” for 10 years as they slowly built their fan following. In fact, Michael W. Smith liked the band’s praise song, “Let it Rain” so much that he covered it on his landmark recording, Worship.

Comprised of frontman Michael Farren, his wife Alisa (vocals), Ryan Riggins (electric guitar), Jody Crump (bass) and David Rollins (drums), Pocket Full of Rocks has always encouraged listeners not to just be “hearers of the word,” but doers. This theme resounds on the band's third album, More Than Noise.

“A lot of what I’ve been sharing out on the road deals with losing your religion and finding relationship with an amazing God,” says Michael. “Much of our message is that you’ve got to make more than noise. It’s easy to just walk into a room, sing the songs on the screen and lift your hands. But if you can walk out and not be transformed or see the world around you transformed, then that wasn’t worship. Real worship comes with change, both in you, and the world around you.”

With this conviction at the forefront of his mind, Michael penned “Alive,” which encourages believers to live loudly—and boldly—for the glory of God. “Come As You Are” is an emotion-packed invitation that reminds listeners that wherever they are in life, whatever they’re experiencing, God loves and longs to connect with them.

Also marking a first for the worshipful band is a collaboration with Michael and Alisa Farren's 14-year-old daughter, Madison, “When Love Whispers Your Name.” The piano-based ballad provides a snapshot of what real grace really looks like.

“Our base theme is that God loves you a whole lot, and religion has made you blind to it,” Michael shares. “So what does God’s love actually look like? We wanted to write a song about grace, and what Love does through it.”