Albums by Ten Shekel Shirt in our playlist: 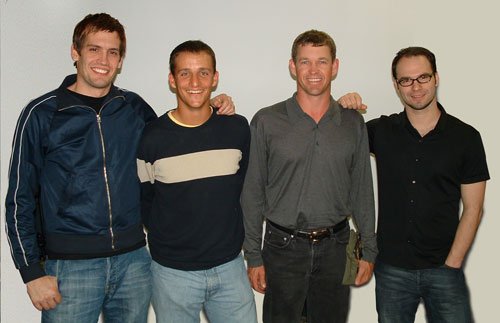 Ten Shekel Shirt is a rock band based in New Haven, CT. The band was founded by Lamont Hiebert, and currently consists of Hiebert along with Jonny Rodgers, Colin Meyer and Tim Sway.

In 2000, Hiebert wrote, recorded and co-produced the album Much. Before releasing the album Hiebert recruited Austin Morrison (drums) and Tommy Lee (bass) to fill out the band. The independent release of that album sparked the attention of Integrity Music who then signed Hiebert. Much was nominated for a Dove Award and featured the No. 1 song "Ocean".

While recording the band's second album, Risk, Hiebert co-founded a charity called Love146 to help combat child slavery and exploitation. Soon after Risk was released (2003, INO Records), Hiebert put his music career on pause to focus on the charity.