Albums by Tenth Avenue North in our playlist:

Over and Underneath
Tenth Avenue North
Songs: 11 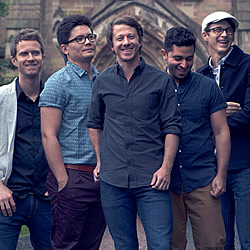 Tenth Avenue North released three independent albums and an EP before its major label debut. Its debut album, Over and Underneath, was released on May 20, 2008, on Reunion Records, and the band began a tour in promotion of the album near that time. The song "Love Is Here" hit the Top 20 on the U.S. Contemporary Christian Music chart, and reached No. 3 by June 21, 2008. It spent 13 weeks on Billboard's Christian Songs chart, peaking at No. 3. and ended 2008 as the 12th most-played song on Christian Hit Radio according to R&R magazine's Christian CHR chart for the year.

The band's next single, "By Your Side", was released in late August 2008 and eventually reached No. 1 on Christian CHR radio in 2009; according to R&R's chart, it had been in that position for three weeks by February 13, 2009. It spent 48 weeks on the Billboard Christian Songs chart, peaking at No. 2. It also won the GMA Dove Award for Song of the Year at the 41st award ceremony in April 2010."Hold My Heart" was released as a single in 2009 and spent 44 weeks on the Christian Songs chart, peaking at No. 4.

"Healing Begins" the first single from their next album, was released on March 2, 2010, and spent 29 weeks on the Billboard Christian Songs chart. The Light Meets The Dark, the complete album, came out on May 11, 2010. The band performed at First Baptist Church of West Palm Beach on May 14, 2010 to promote the new album.

The band has toured with David Crowder Band, Casting Crowns and MercyMe and headlines their own concerts throughout the United States. They also won the "New Artist of the Year" award at the 40th GMA Dove Awards in April 2009.

On March 1, 2011, the band released "Tenth Avenue North Live: Inside and In Between - The Shows, The Songs, The Story" a live album featuring video footage of concerts, video journals about the message behind the music, and live recordings of six of the band's biggest hits.

On August 21, 2012, the band released its third album, The Struggle with "Losing" as the lead single. The album debuted at No 1 on Billboard's Christian and Rock album charts.

On December 14, 2012, the band released an iTunes session, which includes a cover of Ben E King's song, "Stand By Me" and some of the band's singles.

In July 2014, the band released the Islands EP.

On November 10, 2014, the band released their fourth studio album, Cathedrals. The album debuted at No. 1 Billboard Christian Music chart and No. 32 on the Billboard 200 chart.

Tenth Avenue North sponsors children through Compassion International and encourages other people to do so also. The band are also partners with the organization.